Can RT-MALS monitor nanoparticle size and concentration when the solution is turbid?

Real-time multi-angle light scattering, or RT-MALS, utilizes the ultraDAWN™ MALS instrument and OBSERVER™ real-time MALS software to monitor product attributes including molar mass, size and/or particle concentration as a PAT tool for formulation and production processes. This system is particularly beneficial for nanoparticle-sized therapeutics such as viral vectors for vaccines or gene therapy, RNA- or DNA-bearing lipid nanoparticles, liposomes delivering small molecule or peptide drugs, and other nanomedicines.

In nanoparticle applications, RT-MALS can be performed directly in-line with lab-scale production processes up to 100 – 150 mL/min, or via continuous on-line sampling with larger scale processes or when the production process takes place in a static vessel such as a homogenizer.

One of the main challenges that light scattering encounters in the context of nanoparticle production is turbidity that arises from high particle concentrations. The adverse effects of turbid solutions on dynamic light scattering (DLS) are well known:

While DLS detector saturation can often be prevented with suitable attenuation and reduction in laser power, multiple scattering is an intrinsic effect. Instrument manufacturers have come up with several solutions to overcoming multiple scattering but they are often insufficient for production conditions; strong dilution of the nanoparticle suspension may be the only method for overcoming turbidity in DLS measurements. This requires additional apparatus and time, requiring at-line operation of DLS as a relatively complex PAT tool with a correspondingly low sampling rate and consumption of valuable product. 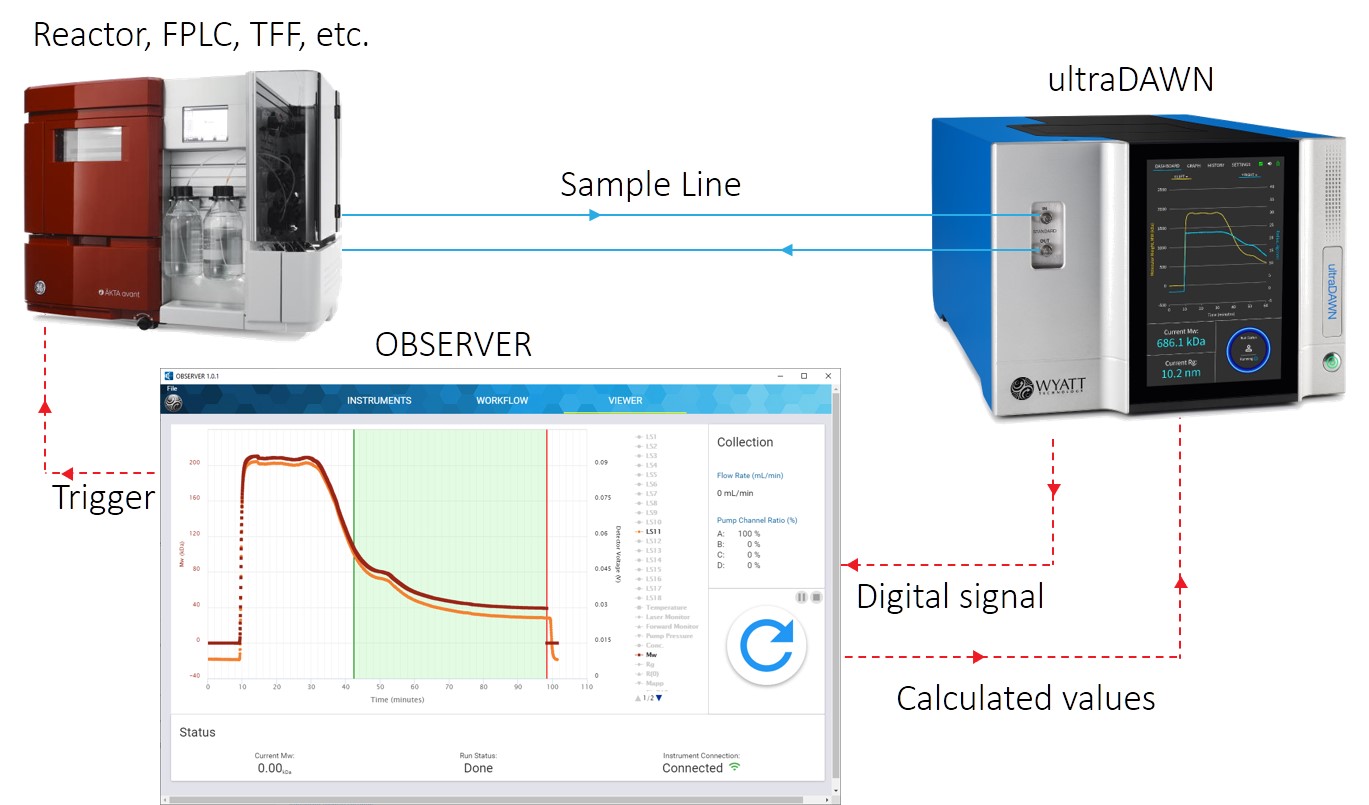 The impact of turbidity in MALS has been explored to a far lesser degree than in DLS, primarily because MALS is almost always used in analytical labs following separation, which inherently dilutes the particles and prevents turbidity. With the advent of RT-MALS, utilized in process development labs and production environments, the question of the impact of turbid samples has become of interest. And since RT-MALS measures both particle size and concentration, how turbidity affects both of these should be addressed.

Wyatt began exploring turbidity in MALS using 100 nm diameter polystyrene latex spheres (PSLS) as surrogates for many viruses and lipid nanoparticles (since PSLS have a higher refractive index than most nanomedicines, PSLS suspensions actually become turbid at somewhat lower concentrations). Concentrations from 9 x 1010 /mL up to 6 x 1012 /mL were tested. While the lowest concentrations were not visibly milky, the image to the right shows just how turbid the solution can get.

The concentration of 9 x 1010 /mL is more or less the upper limit for 100 nm PSLS to be measured accurately in terms of both size and concentration, without any detector saturation, by setting the ultraDAWN laser power to 10%. However, at higher concentrations the detectors saturate and measurements begin to lose accuracy.

In order to overcome detector saturation, we installed attenuators in front of the photodiodes. The attenuators completely prevent saturation up to the highest concentration tested with 100% laser power (and in fact at higher concentrations too, as explained below). Remarkably, size measurements by MALS with attenuators remain accurate despite strong multiple scattering phenomena. 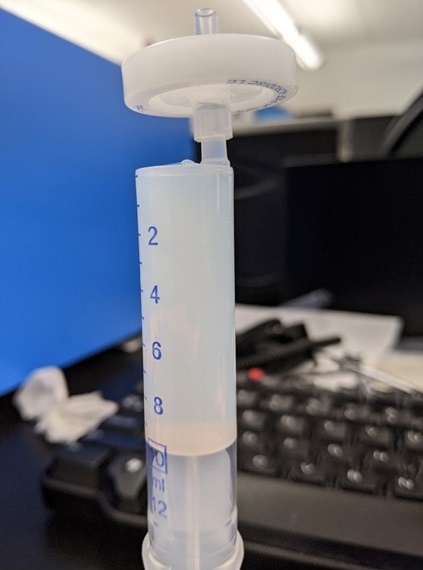 Concentration analysis by MALS depends on two assumptions: that the measured size is accurate and that the incident laser beam intensity is well known. Having already determined that sizing by MALS remains accurate despite multiple scattering, we need to check the second assumption. As it turns out, the milky conditions seen in the image lead to a decrease in laser power reaching the flow cell’s detection volume (since so much light is scattered away en route). Standard MALS particle concentration analysis therefore reports a result that is significantly low.

Like all Wyatt MALS instruments, the ultraDAWN is equipped with a Forward Monitor detector that monitors transmission through the flow cell. In analytical applications entailing characterization of molecules that absorb 660 nm laser light, such as heme-containing proteins, we take advantage of the decreases in transmission measured by the Forward Monitor to calculate the loss of laser intensity in the flow cell and correct the molar mass reported by ASTRA. The same correction was applied to the turbid nanoparticle samples and, fortuitously, was found to restore accurate particle concentration values. This correction is available from OBSERVER 1.3.1. 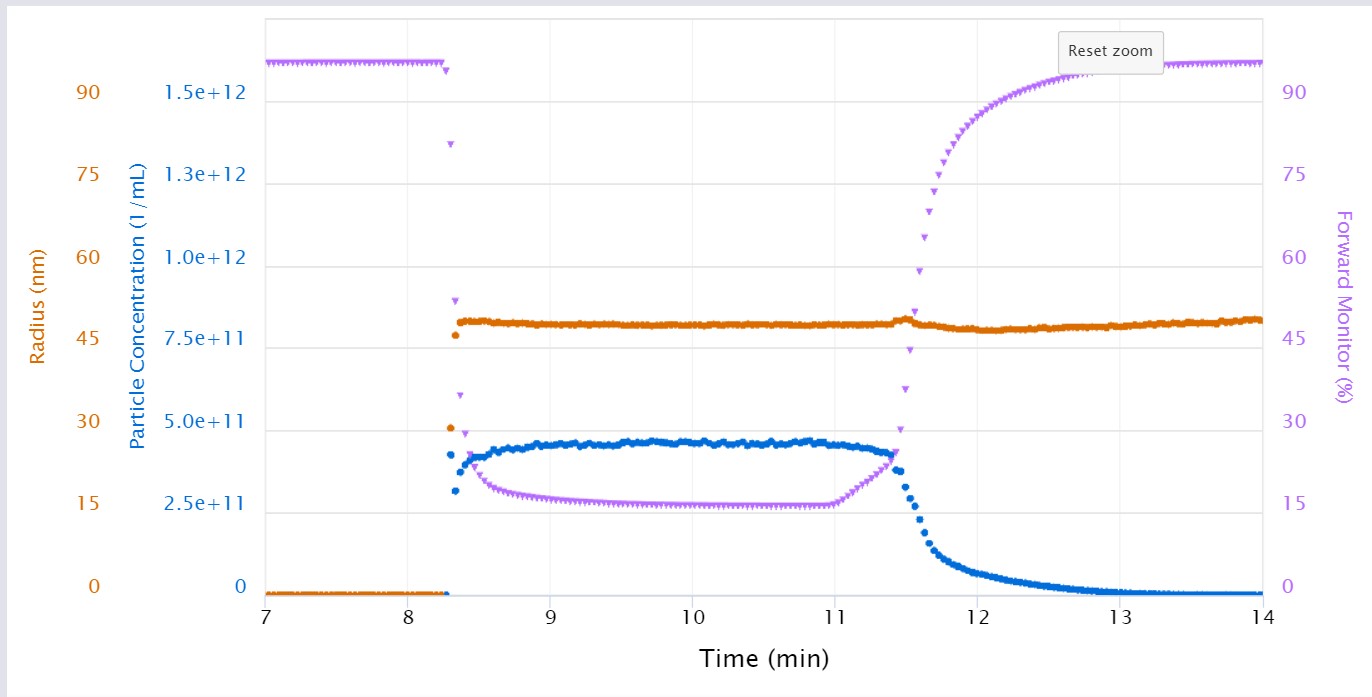 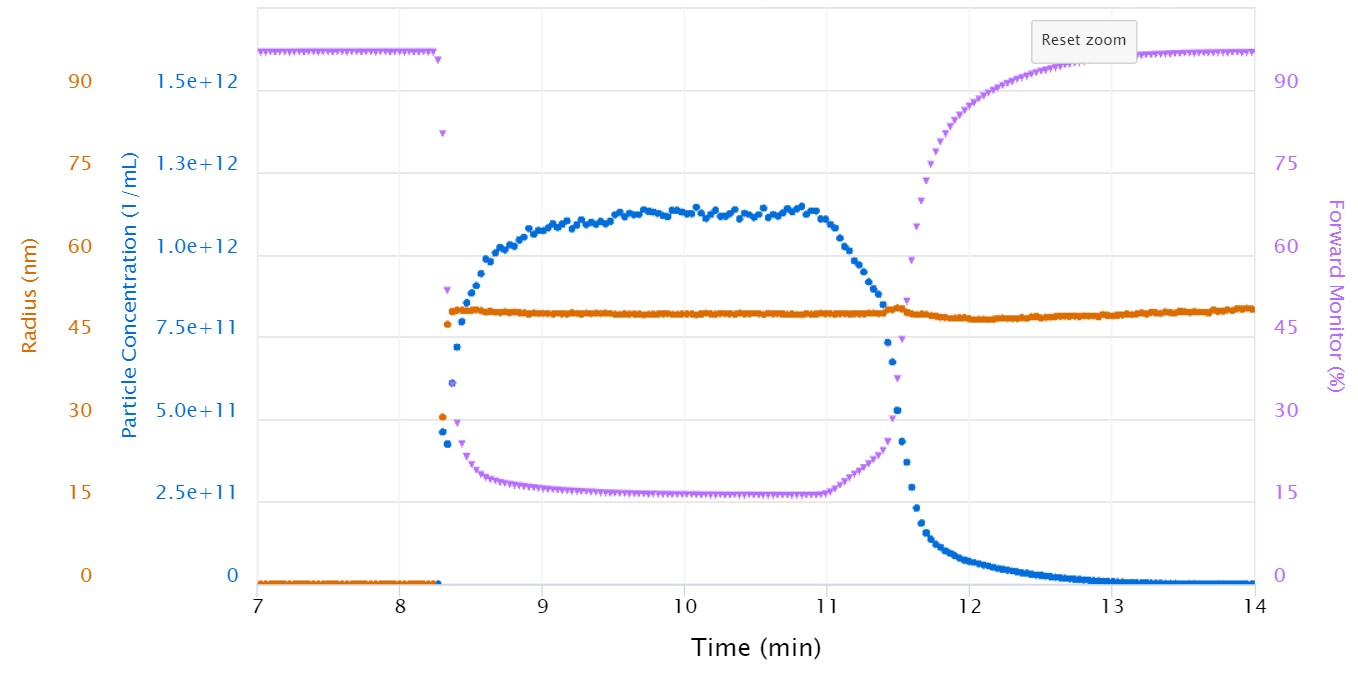 Click to enlarge. The effect of the Forward Monitor correction on particle concentration measurement in a turbid solution. Top: without FM correction. Bottom: with FM correction.

These two features, installation of attenuators and use of the Forward Monitor to correct for turbidity, mean that in response to the question “Can RT-MALS monitor nanoparticle size and concentration when the solution is turbid?”, we are happy to report that the answer is a firm “Yes”. So how high can we go in concentration?

As turbidity increases, transmission decreases but scattering increases. The net effect on the total light reaching the photodiodes is an overall increase up to roughly 1 x 1012 /mL for 100 nm PSLS, but with further rise in concentration the photodiode signal actually decreases and saturation is never a problem. However, transmission always decreases with increasing particle concentration, and at some point the Forward Monitor signal is too low to provide a good measurement of the transmitted light, so particle concentration cannot be measured accurately.

We set the upper limit to good concentration measurements when the Forward Monitor decreases from 100% to roughly 7%, which occurs at about 2 x 1012 /mL for 100 nm PSLS. This degree of scattering and attenuation corresponds to about 5 x 1012 for 100 nm LNPs or lentivirus (due to their weaker scattering) or 8 x 1012 /mL for adenovirus (which has a diameter of about 90 nm). As it turns out, above these points the size measurements are less reliable as well, which leads to further error in concentration. For the most turbid solutions, the ultraDAWN may be configured on-line using a quaternary pump to draw and dilute up to 10x.

The ultraDAWN now ships with a full set of attenuators which may be installed in the factory or in the field. When the intended RT-MALS applications are focused on concentrated nanoparticles such as lentivirus, adenovirus or lipid nanoparticles, attenuators should be installed on 17 detectors (we leave Detector 11 unattenuated for calibration purposes). When the intended applications are macromolecules or low-concentration particles, no attenuators should be installed, providing maximum sensitivity. When both types of applications are expected, attenuators may be installed on the even-numbered detectors only, leaving the odd-numbered detectors open, and the appropriate detectors may be enabled in each OBSERVER workflow. If you are in the process of ordering an ultraDAWN, please discuss with your sales representative your options for specifying attenuator factory installation. The configuration may later be changed in the lab as needed by a Wyatt field service engineer.