How is ultraDAWN used in-line with FPLC to monitor chromatographic purification of AAV?

Adeno-associated viruses (AAV) are typically purified and enriched to enhance the Vg/Cp ratio via ion-exchange chromatography. The common approach to evaluating the results is collecting fractions and sending them to an analytical lab for determination of the full:total ratio, for example by ddPCR + ELISA (or more effectively by SEC-MALS). Using real-time multi-angle light scattering (RT-MALS) to get immediate feedback on the results of a purification run would be of great benefit to process development scientists since it would speed up development time and reduce the volume of offline analyses. 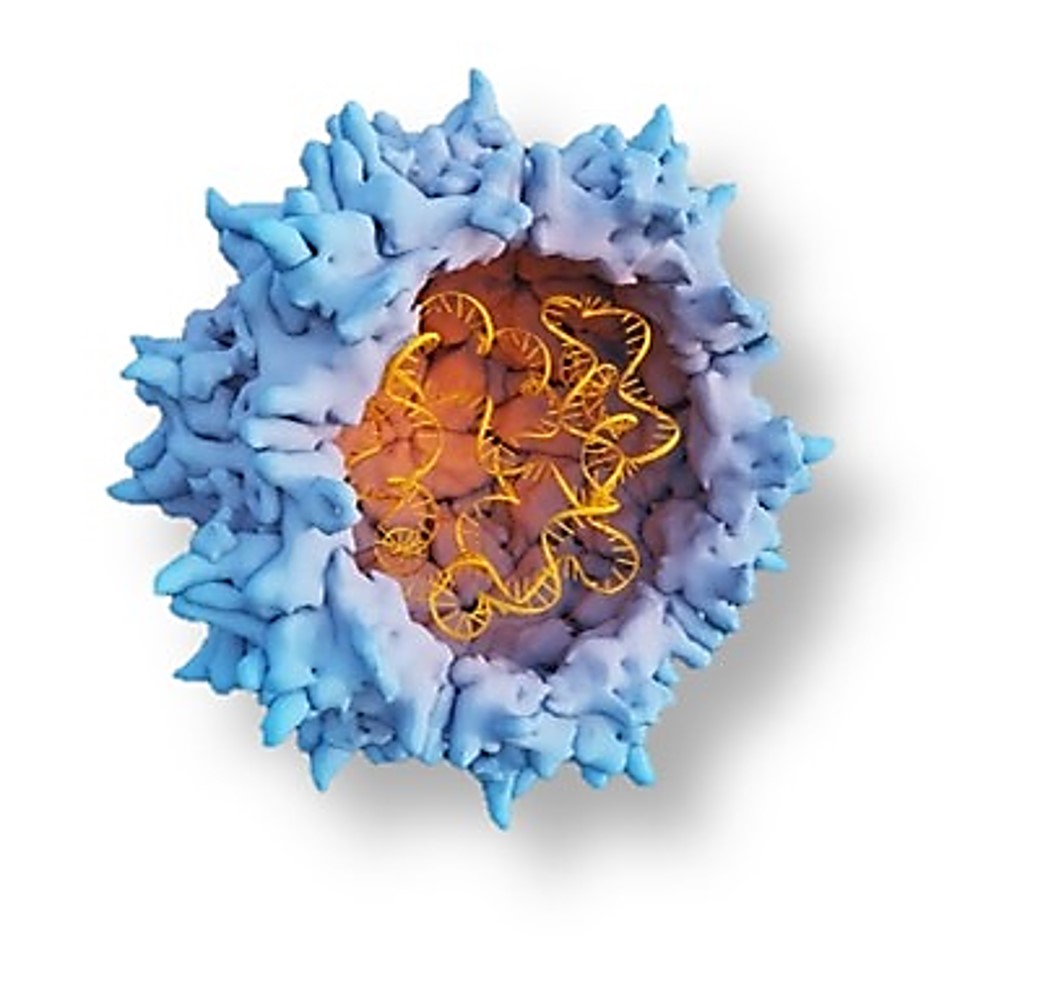 Positioning an ultraDAWN® in-line with an AKTA avant or other FPLC system can, with the right setup, provide the same information as the SEC-MALS Viral Vector Analysis (VVA), including Vg/Cp, viral titer, concentrations of full & empty capsids, and molar masses of the capsid, genome and complete virus. The data are acquired in ASTRA® and processed with ASTRA’s VVA module, giving results immediately following AAV elution.

Configure ASTRA (with the VVA method) to identify the correspondence between AUX IN ports and UV wavelengths, and match the AU/V factors to those set up in the chromatography software. 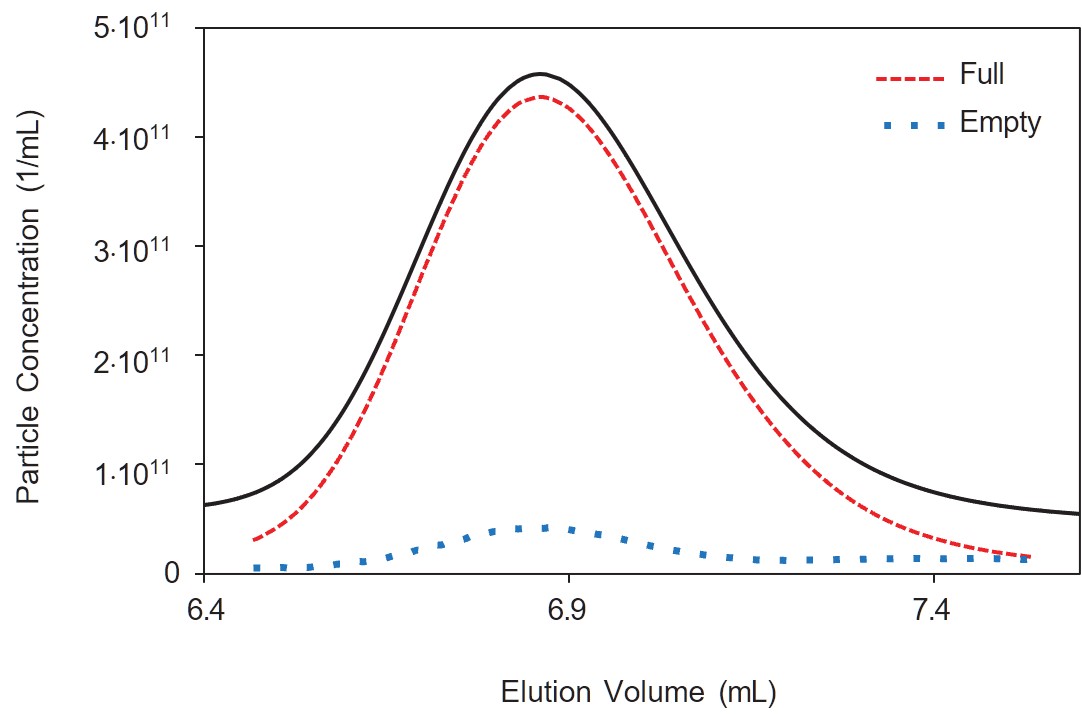 ultraDAWN + ASTRA provide full and empty capsid titers across the eluting peak, from which Vg/Cp is calculated.

ultraDAWN integrates with an AKTA avant or similar FPLC to monitor AAV purification and enrichment..

Ready to go,
but watch out!

With these set up, you are now ready to collect and analyze AAV data.

Note that co-elution of free DNA or proteins with the AAV may skew the results. If all you need to do is determine when viruses are eluting (as opposed to free molecules), it may be more reliable to use the particle analysis method. ASTRA’s particle methods employ just light scattering (viruses scatter far more light than free molecules with equivalent weight concentration) and do not make use of UV signals (which are more or less equal for viruses and free molecules present at the same weight concentration).

What if I need
real-time feedback
of the AAV properties
like Vg/Cp?

The ultraDAWN can be operated via our OBSERVER™ real-time software. Before the end of 2022, we will be releasing OBSERVER 1.5, which includes the Inline AAV workflow, and provides all of these calculations in real time.

All of the aforementioned results calculated by ASTRA after the run, are calculated and displayed during the run in OBSERVER and on the ultraDAWN’s front panel. One of them, for example Vg/Cp, can be used as the trigger criterion for setting OBSERVER’s trigger output, for example the trigger can be set when Vg/Cp is between 0.5 and 1.1. The trigger is output as a 2 V signal on the ultraDAWN’s Analog Out 1 channel, that can be read into UNICORN via the E9 Analog In 1 channel for turning fraction collection on or off.

In addition, one of the calculated results can be streamed to the FPLC via an analog signal that is proportional to the calculated value. So let’s say you want to record Vg/Cp in UNICORN and display it along with the UV traces, or even use it in UNICORN to make pooling decisions. The E9 analog input can accept signals up to 2 V. In OBSERVER, you would select Vg/Cp for output on Analog Out 2 and set a proportionality constant of 1. Then you would display Analog In 2 in UNICORN and possibly set a watch on it in the method for beginning and ending fraction collection, such that fraction collection begins when Vg/Cp is e.g., above 0.5, and ends when it is below 0.5.

Again, if all you need to do is determine when the viruses are eluting, use the Inline Nanoparticle workflow. It does not require UV signals and will provide a clear and straightforward indication of virus-sized particles relative to free macromolecules. 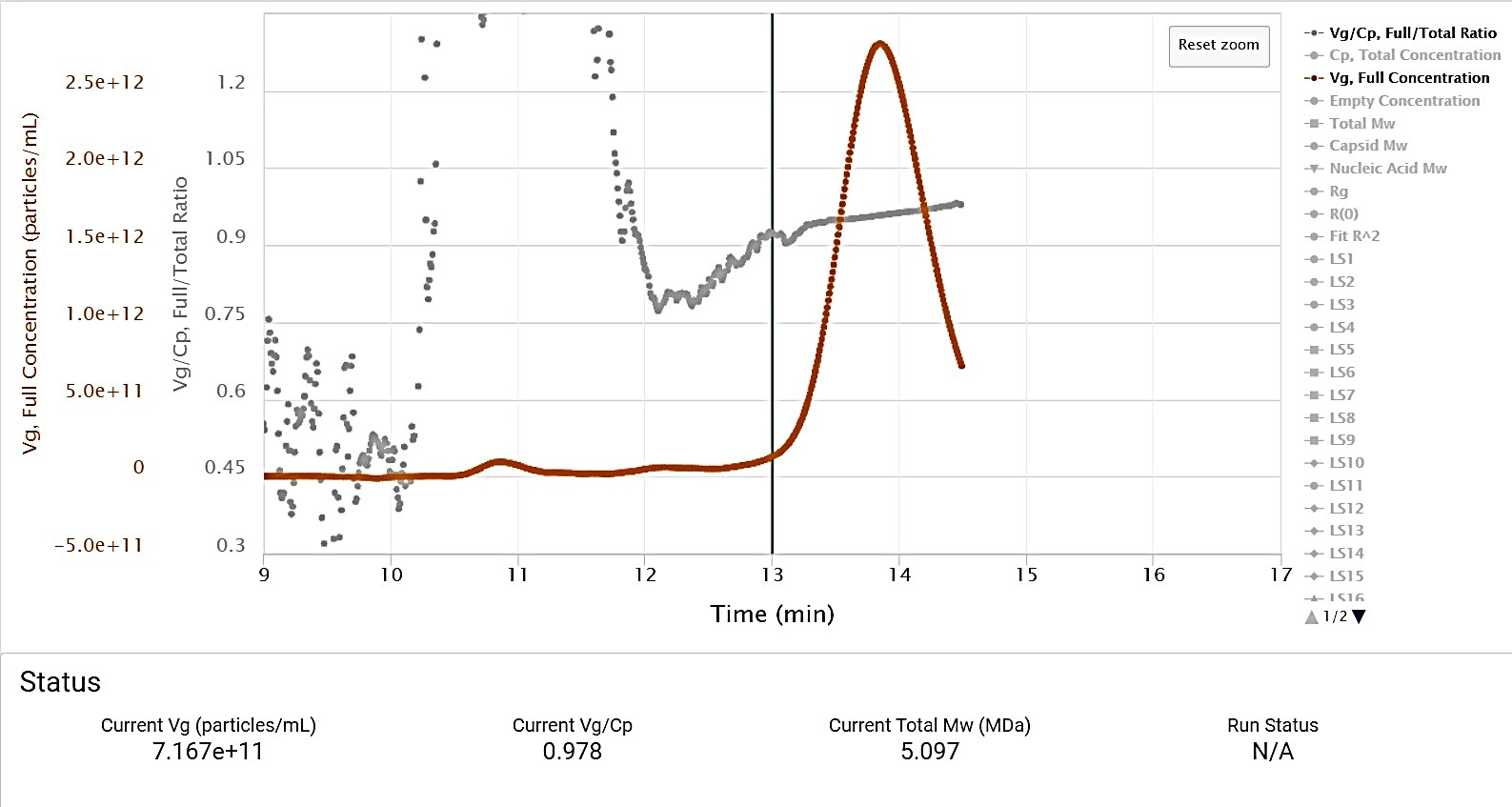 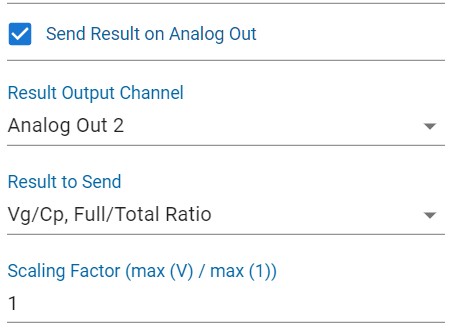 Configuring the analog output of Vg/Cp in OBSERVER.