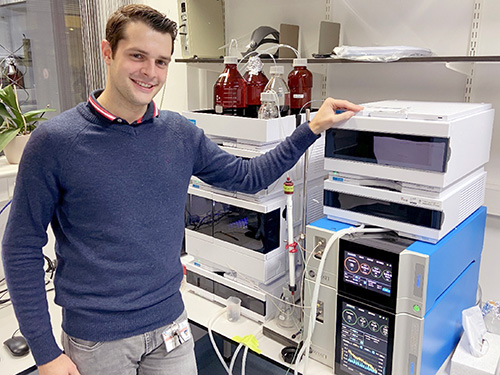 The life sciences are notorious for poor reproducibility. Ensuring quality control of proteins that are expressed and purified for use in basic research is one of the pathways to improved reproducibility that has been advanced by P4EU, the Protein Production and Purification Partnership in Europe, in conjunction with ARBRE-MOBIEU, the Association of Resources for Biophysical Research in Europe. The Protein Quality Standard (PQS) is a set of guidelines developed by the joint P4EU/ARBRE-MOBIEU Protein Quality Initiative working group that is detailed in https://p4eu.org/protein-quality-standard-pqs/.

The PQS naturally references basic biophysical characterization techniques such as SEC-MALS for characterizing protein homogeneity, an essential component of protein quality. Therefore it is encouraging to see that SEC-MALS has been adopted for protein quality control in prominent academic core facilities such as the Ghent University VIB Protein Core, where our featured customer Kevin Balcaen takes protein quality control to heart. Kevin was kind enough to take some time out of his busy schedule and provide an overview of his SEC-MALS journey.

I grew up in Kruisem, which is about 20 minutes from Ghent, Belgium. I studied chemistry at the University of Applied Sciences of Ghent, then went on to biochemistry in the 2nd year and finalized with some additional biotechnology in the 3th year. In my last year I did my thesis and internship at the VIB Protein Core led by Jurgen Haustraete. Since then I have been working here, and I hope to stay for a long time.

At the VIB Protein Core we cover the whole process from gene to protein. We start with the cloning of the gene of interest into our expression plasmids; the expression can then be tested in mammalian, insect, yeast or bacteria cultures. After selecting the best expression system, a large-scale production run can be performed - up to 20 L for E. coli clones and 12 L for Pichia clones. This is followed by a purification process adapted to the specific protein and then a thorough set of final quality control checks. SEC-MALS is mostly involved in this last step.

My role in the Protein Core includes all the aforementioned steps, although I specialize in quality control and the corresponding analytical techniques including SEC-MALS, protein-protein interactions, cellular activity assays, etc. Beside experimental work, I also take part in the daily operation of the Protein Core by assisting the Core Manager and replacing him during absence. I am very eager to learn more about proteins and how they behave at different steps in the process.

The group leader, Jurgen Haustraete, always believed in light scattering and had high expectations for it. When I arrived at the Protein Core, they had just bought a 2nd hand SEC-MALS system that included a DAWN® MALS instrument and an Optilab® refractive index detector. I was very interested in the possibilities of the system and briefly trained with the scientist who was the SEC-MALS user at that time. He left our unit shortly after, and I became responsible for the system. Since I wanted to know more about the system so as to be able to provide our clients the best possible service, I then attended Light Scattering University® in Dernbach, Germany. In that week I learned a lot about the system and gained sufficient confidence to work with it on a daily basis. I have attended several webinars and user meetings, and was in contact with the Wyatt support team several times. Recently we bought a new DAWN 8 and Optilab, and are happy with both the service and the instruments.

As a service facility we can now give the client more details about their sample and its structural properties. SEC-MALS improved the way we look at samples, and helped us understand how certain events happen and what the effect on the structure might be. It is a tool that we use daily - every protein that leaves our facility is analysed by the DAWN. A consortium consisting of other protein facilities in Europe reviewed our lab recently and rated us as one of the best facilities in Europe. The Wyatt instruments certainly contributed to this!

Instrumentation from Wyatt Technology helps us maintain our quality standards at a high level.