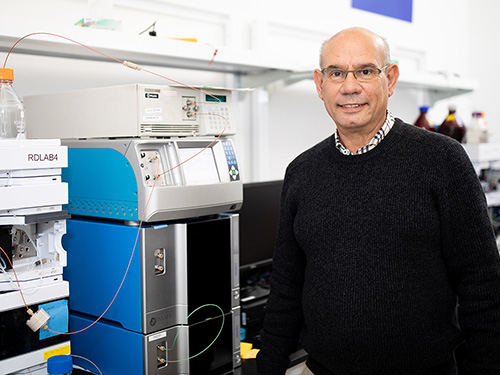 It’s always a pleasure to hear from veteran users of Wyatt’s MALS instruments, and doubly so when they check in from all corners of the world. Professor Sergio Paulo Campana Filho hails from Brazil, and amazingly has been using SEC-MALS for characterization of biopolymers for almost as long as the DAWN® has been commercially available. He graciously accepted our invitation to relate how that came to be. Here is his tale:

"My history at the Campus of Sao Carlos of the University of Sao Paulo and my engagement in scientific research began in 1976 as an undergraduate student in the Department of Chemistry. At that time, I had the opportunity to engage with an excellent research team, and from then on, I've been always inspired by that rich scientific ambiance. In 1981, when I was a graduate student, I became a permanent member of a scientific research team of the University of Sao Paulo at the Campus of Sao Carlos.

"My first contact with Wyatt instruments was in 1989, when I was developing part of my Ph.D. thesis at the Plant Macromolecule Research Center (CERMAV; Grenoble/France), under the supervision of Prof. Marguerite Rinaudo and Prof. Michel Milas. My research focused on the physical chemical characterization of welan and rhansam, exopolysaccharides produced by bacteria which had very high potential for applications in the food industry. In the course of this work I was introduced to several advanced techniques for full characterization of these natural polyelectrolytes, including NMR spectroscopy, rheology, size-exclusion chromatography and light scattering. Thus, I had the opportunity to use MALS technology in advanced scientific research focused on natural polymers from the very beginning of my career. Indeed, the facilities at CERMAV included light scattering instruments from Wyatt which I used extensively to characterize the macromolecules I was studying. Thanks to that I was able to develop a solid foundation for carrying out studies focused on water-soluble macromolecules. Ever since, I’ve dedicated my efforts to developing physical and chemical studies focused on water soluble polymers, mainly chitosan and derivatives. I have realized that the use of SEC-MALS is essential in obtaining complete characterization of such polymers and in developing advanced polymer-based materials for biomedical applications."