Discovering a new small-molecule drug via high-throughput screening (HTS) is a rather dreary affair. Scientists team up with engineers to automate the process of slogging through thousands to millions of compounds, testing their binding to target proteins, looking for the precious few that do bind. Often those ‘hits’ are literally one in ten thousand or one in a million, and significant effort is invested to further validate that these were not ‘false positives’―that they do in fact bind, and subsequently to determine whether their interaction induces therapeutic effect.

The low probability of a true hit leaves lots of room for spurious mechanisms producing false positives, which exhibit many of the hallmarks of binding to the target protein but lead to dead ends in terms of useful drugs. A common source of false positives has come to be known as ‘promiscuous inhibitors’, defined as compounds that appear to inhibit a wide variety of enzymes in HTS but have no therapeutic effect. The leading lab investigating the mechanisms of promiscuous inhibitors is headed by Prof. Brian Shoichet of the UCSF Department of Pharmaceutical Chemistry.

As Shoichet and his staff discovered, one of key causes of promiscuous inhibition is the colloidal aggregation of the compound into particles with sizes in the range of tens to hundreds of nm (McGovern et al., J. Med. Chem. 2003, 46, 4265-4272; Seidler et al., J. Med. Chem. 2003, 46, 4477-4486). These particulates tend to sequester proteins, primarily through surface adsorption. However, their interactions with proteins are highly non-specific: while in an assay they may strongly inhibit an enzyme, just add another protein―such as serum albumin—and the enzymes are readily displaced by albumin, free to continue their activity.

Even adding more enzyme appears to reduce the inhibitory effect since the particulate surfaces saturate and all the excess enzyme is available to act upon substrate. Much of this behavior is discussed in Shoichet’s 2006 Drug Discovery Today article, intriguingly titled “Screening in a spirit haunted world”.

Colloidal aggregation takes place in a highly concentration-dependent manner (Coan and Shoichet, J. Am. Chem. Soc. 2008, 130, 9606–9612), and the researchers were able to demonstrate that this behavior is behind one of the more enigmatic response curves exhibited by certain compounds, the “bell-shaped” curve: at low dose the drug appears to have high effect, but at higher concentrations it loses efficacy (Owen et al., ACS Chem. Biol. 2014, 9(3), 777–784). The loss of efficacy closely corresponds to the onset of aggregation, at the critical aggregation concentration (CAC).

The Shoichet lab has developed several screening techniques, one of which relies on the DynaPro Plate Reader to identify aggregation (Feng et al., Nat. Chem. Biol. 2005, 1, 146 – 148). In his own words: Brian states that The DynaPro instrument is our first line of defense for checking whether a group of molecules are acting as aggregators.

Testing a lead compound for aggregation to eliminate false positives is now becoming standard practice. While much of the recent research at the Shoichet lab involves in silico docking simulations—to increase the virtual screening space while greatly reducing the number of physical assays needed—testing for aggregation is still a standard operating procedure (Carlsson et al, J. Med. Chem. 2010, 53, 3748–3755; Benod et al., J. Biol. Chem. 2013, 288, 19830-19844). With the increasing interest in drug cocktails, such as those used for treatment of HIV or broad-spectrum antibiotics, it is also important to verify that non-aggregating compounds do not cross-induce aggregation (Cokal et al., Chem. & Biol. 2014, 21, 541–551.

Even if a compound is found to aggregate, all is not lost. Appropriate conditions, often involving a low concentration of detergent, can be identified to keep the compound monomeric and perform a more reliable test for specific inhibition. Referring again to the DynaPro Plate Reader, Shoichet mentions that: "the 384-well format makes looking for particle formation at multiple concentration ranges, and multiple conditions (e.g., with and without detergent), very convenient."

As it turns out, aggregation can also have a positive role in small-molecule drugs. Investigations of the colloidal behavior of drugs in conditions replicating intestinal fluid indicate that orally-dosed drugs can greatly increase bioavailability upon aggregation, leading what would appear to be low-efficacy compounds to actually be quite effective (Doak et al., J. Med. Chem. 2010, 53, 4259–4265). Here, too, DLS provided key input to determine aggregation conditions, helping to identify the potential benefits of colloid formation.

It has been our great pleasure to play a small part in Prof. Shoichet’s work, which has made such a significant contribution to the world of drug discovery, most recently recognized in his reception of the Israel Chemical Society’s Barry Cohen Prize for Medicinal Chemistry. We were very happy to have him grace our 2015 International Light Scattering Colloquium with his plenary talk, “Colloidal Aggregation in Drug Discovery & Pharmacology”, which can be viewed online here, and look forward to additional fruitful interactions!

“the 384-well format makes looking for particle formation at multiple concentration ranges, and multiple conditions (e.g., with and without detergent), very convenient.

Process of promiscuous inhibition: compound aggregates into colloidal particles that then sequester enzyme on their surface. Coan and Shoichet 2008. 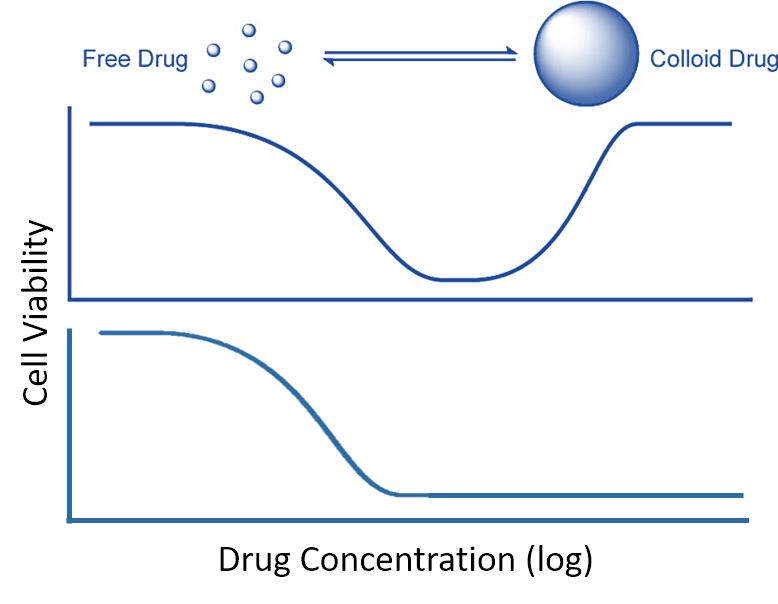 The DynaPro instrument is our first line of defense for checking whether a group of molecules are acting as aggregators. 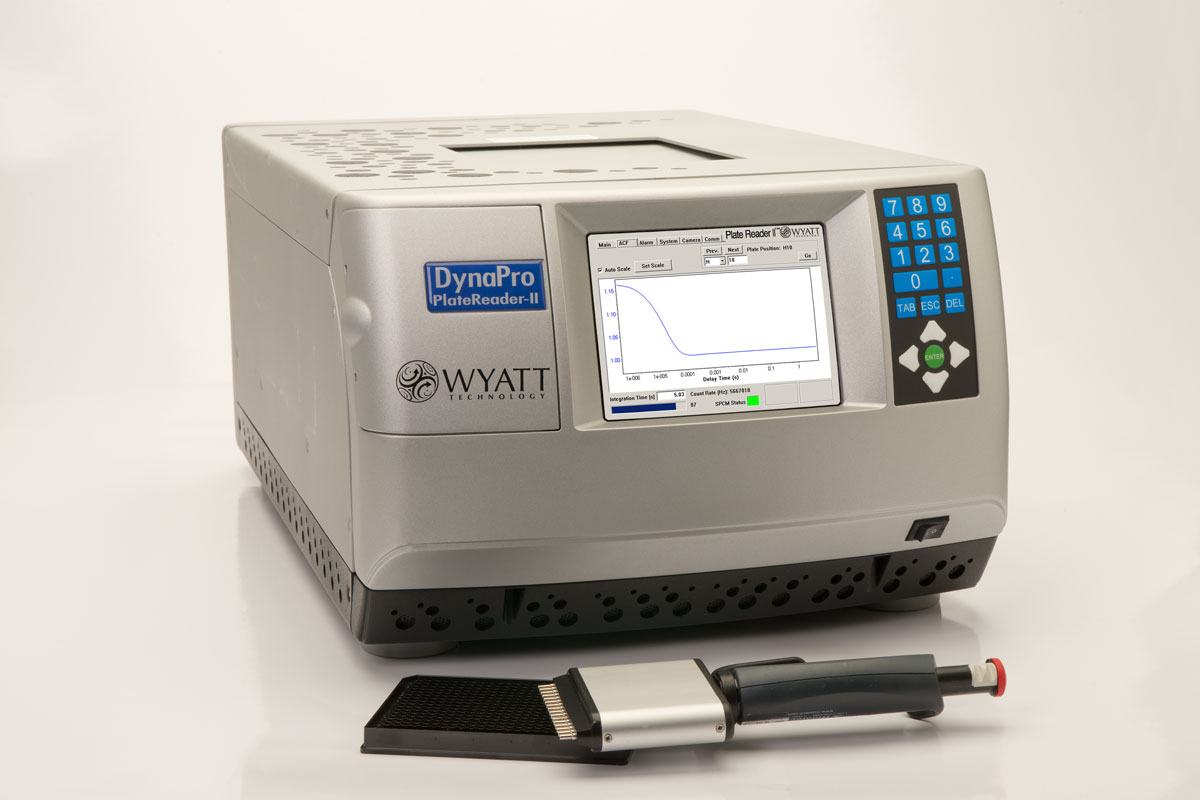