To a great extent, much of WTC's business began with the Small Business Innovation Research (SBIR) contracts awarded to the firm for its outstanding technological prowess and potential. The SBIR contracts are administered by certain agencies of the U.S. Government who have set aside a fraction of their authorized R&D funding for exclusive award to small businesses. The purpose of these highly competitive programs is to encourage scientific and technical innovation in areas deemed to be of national importance. The successful commercialization of products developed under these programs is one of the most important objectives of SBIR funding. 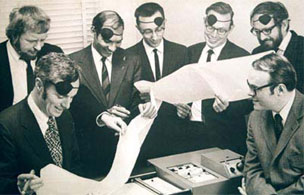 The inventors of MALS celebrate an early application of laser light scattering.

WTC has been awarded contracts from the U.S. Army Bioengineering Medical Research & Development Laboratory to establish the feasibility of instrumentation for the detection of toxicants in drinking water within sixty minutes. Another contract was from the U.S. Army Armament, Munitions and Chemical Command to build an aerosol monitoring device for sub-micron particles. The potential applications for this instrument include real time identification of aerosol particles such as asbestos fibers and biological agents. Another major contract was awarded by the Office of Naval Research, to develop an in situ particle monitoring device for characterizing undersea environments and their particulate constituents.

By far, the company's commercial flagship instrument, the DAWN, has been the driving force of the company. With extensive emphasis placed on intellectual property and new, patentable developments, the DAWN and miniDAWN systems have been sold in increasing numbers for more than two decades. Instruments have been placed in thousands of laboratories throughout the world, making them the most widely-recognized light scattering products on earth. The utility of the instruments is underscored by the burgeoning bibliography of publications, most of which have appeared in refereed journals. The DAWN systems provide unique and powerful tools for many different areas of analytical chemistry, including quality control, process control, molecular weight and size determinations, and a host of other applications, which are all possible with these multi-angle light scattering detectors.

The DAWN detectors are used by the world's most prestigious universities and some of the largest corporations in the world including DuPont, Dow Chemical, IBM, GlaxoSmithKline, Procter & Gamble, Pfizer, Bayer, ExxonMobil and Merck. The company's applications have also involved sales to companies at the forefront of the biotechnology arena including Amgen, Genentech, Biogen Idec, Genzyme, and MedImmune.

Increasing marketing activities by WTC, both in the U.S. and abroad, has heightened universal awareness of the need for better analytical instruments. A Scientific Advisory Board comprised of one member of the National Academy of Sciences and a Nobel Laureate underscores the company's commitment to scientific excellence, as well as to worldwide acceptance of its products.